Small Sinkhole on Sir John A McDonald Parkway at Woodroffe 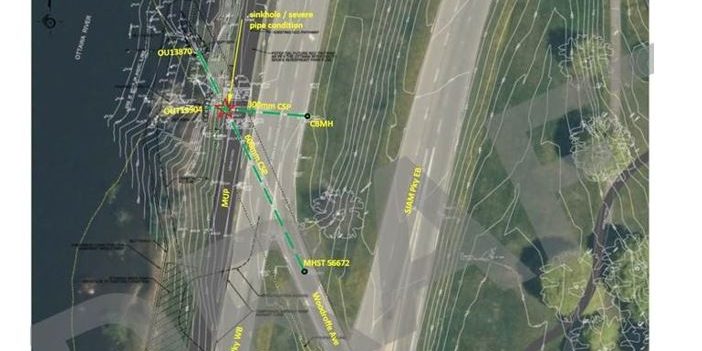 A small sinkhole was identified just north of the multi-use pathway on Sir John A McDonald Parkway at Woodroffe Avenue (starred location below) in late November, 2021.   Upon discovery, the area was immediately cordoned off from the public with modular fencing.   In mid-December, the City carried out a CCTV investigation of the sewers and determined the cause of the ground loss to be the local collapse of two corrugated steel pipe sewers (600mm and 300mm).   The site was monitored over the holidays and appears stable in the short term, but there is a high a potential for extension of the voids/sinkhole if the blocked/collapsed sewers are not repaired in the near future.  As such, the Asset Management has requested that Infrastructure Services carry out an emergency repair of this critical infrastructure in the near future.

The City is meeting internally to discuss next step, the work will likely take place in three stages:

During the investigation and repair, one of two westbound SJAM lanes (the north curb lane) will need to be closed for construction staging.   There will be inadequate space to safely divert pedestrian traffic on the MUP around the construction site, as such the City plans to fully close the MUP for the 1 day investigation and 3-4 day repair period.  “PATHWAY CLOSED AHEAD” signs would be placed at Westboro Beach, New Orchard Underpass and  Deschenes Rapids Lookout to identify the closure ahead.   The pathway east and west of the construction site would still be fully accessible, but pedestrians would not be able to pass through the site itself.  The City understands the importance of this pedestrian pathway to the community and they will make all efforts to re-establish access for pedestrians as quickly as possible.

As more information is made available, we will share it with residents.