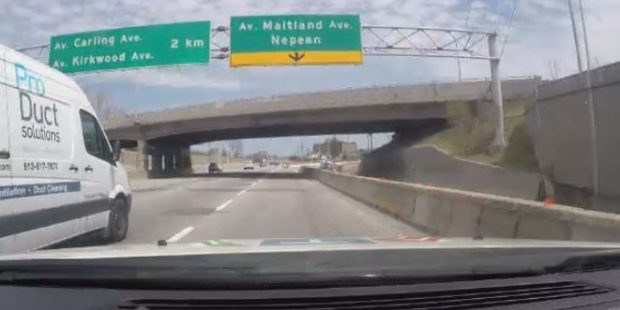 Ottawa – The section of Highway 417 between Carling and Bronson avenues will be fully closed from Saturday, August 10 at 6 pm until Sunday, August 11 at 11 am.

During the closure, the Ontario Ministry of Transportation will reconfigure traffic lanes as part of the ongoing highway expansion between Maitland Avenue and Island Park Drive. You can find more information about the highway expansion here.

Westbound on-ramps to Highway 417 at O’Connor Street, Lyon Street, Bronson Avenue, Rochester Street and Parkdale Avenue will be closed during this period.

Eastbound on-ramps to Highway 417 at Maitland, Carling and Parkdale avenues will be closed during this period. The eastbound on-ramp at Carling Avenue will remain closed for a further seven weeks following this work.

During the 17-hour closure, the following detours will be in effect (see maps):

The Ministry of Transportation has advised that there may be lane closures before and after the full closure, beginning at 9 pm on Friday, August 9 until 6 am on Monday, August 12.

The public is advised to plan all trips well in advance as significant delays are expected during the closure. There are many transportation options, including OC Transpo, carpooling and other alternative forms of transportation while this closure is in place.

Special events this weekend will impact traffic around Ottawa
May 27, 2022