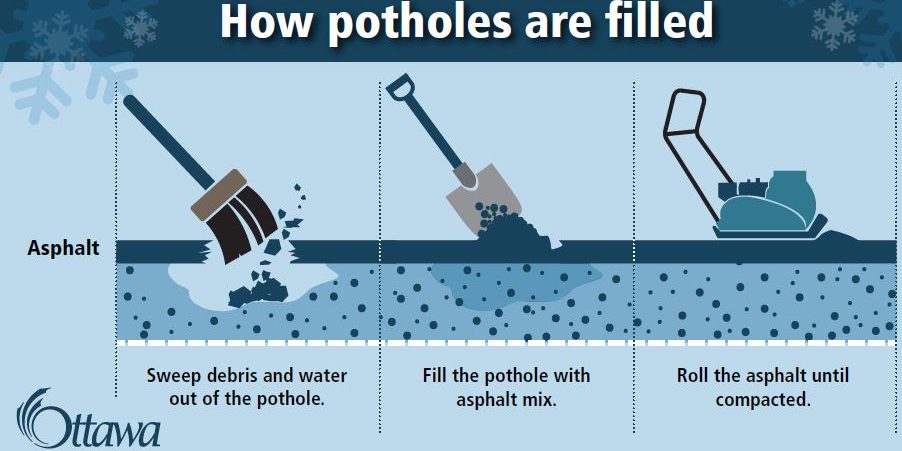 With the rising temperatures, City crew will be out this weekend working to address the many potholes that have appeared with the constantly changing temperatures.

Teams will be out during the day in all areas throughout the City filling the potholes.  The priority will be to address the most severe potholes that have formed in the travelled portion of the roads (i.e. where the tire tracks are) as well as those emergency locations raised by resident calls.

Teams will also be out working this weekend on sidewalk machines.  All of the City’s GRYB icebreaking machines will be used where possible which will allow crews to perforate the sidewalks of their heavy ice, promoting melting and ice removal.  The machines move slowly but are effective.

Additional teams will be deployed to scrape and shave the streets of ice. The focus in this operation is not to clear the road entirely, as this would leave significant lips of ice at the ends of driveways.  Instead, crews are aiming to open up the centre of the roads (to create a levelled or bare patch of about 1.5-1.8 m).  This will open up the road allowing the sun to hit the pavement to speed the melting process.

Finally, crews will have a team on the Rideau River who will be doing the ice blasting.  This is an annual event that involves carefully planned blasting to help break the ice on the river.  By performing this work now, it will help the flow of the River and hopefully prevent flooding around homes in the area. City teams will be working hard this weekend.  Residents can support by keeping cars off the road where possible, it would facilitate more efficient operations.