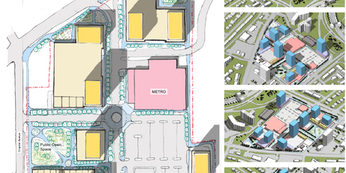 RioCan, Fotenn and Metro met with Bay Ward community associations to discuss updates to their site plan and present their concept drawings. During the last public meeting they heard from the community that the site should aim for the following goals:

Click here to view the presentation and all the concept drawings.

The north south corridor in the middle of the site would be line with trees and sidewalks, retail stores would line the street giving a “main street” feel.

As part of Phase 1, there will be a multi-use pathway along the east side of the site. Other pathways will be included in the future.

The plan is to continue to have buses drop riders off in front of the Metro. They will run along the new “main street”.

Wendy’s will be rebuilt at the same spot, but their lease will not be renewed. They have about 8 years left on the site.

Boundaries for the plan are being finalized. Details on process and consultation dates will be released within the next few weeks. The first consultations will start in the fall. The medium and long term concept drawings presented by RioCan were requested by the community and are not what will eventually be submitted. They represent one possible future for the site.

Any future plans submitted by RioCan will be developed in accordance with the Secondary Plan for this site.