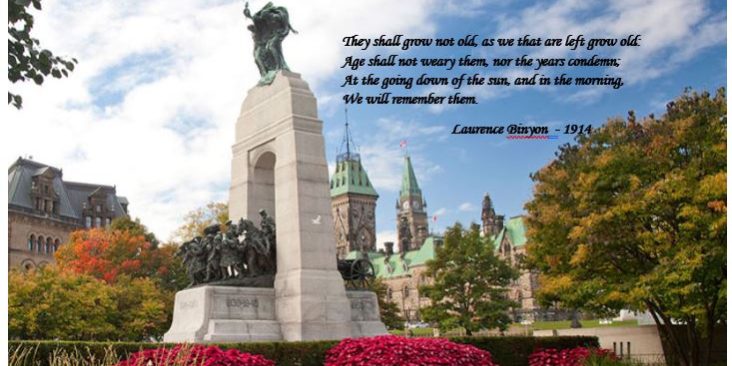 Remembrance Day is a solemn occasion when we give thanks and remember those who served their country.  My own father served in the Irish Army and my mother worked on an assembly line that built Lancaster Bombers. They never wanted to discuss those difficult times of air raids and bomb shelters. Remember that peace is the most important part of a democratic society. Let us give thanks and remember those who made sacrifices and the many who made the ultimate sacrifice so that we could enjoy our freedom.

I would like to take this opportunity to thank all men and women who currently serve in the Canadian Armed Service, both at home and abroad. Let us never forget the men and women who have paid the ultimate sacrifice in service for our nation.  We remember them.

Since there aren’t any Remembrance Day events in Bay Ward, I will be at the Blood Red Memorial flag pole at Britannia Park by the Trolley Station on November 11th at 10:45 am. The Northwest One Choir will perform followed by a moment of silence at 11 am.

You are welcome to join me.

Remembrance Day was first observed in 1919 throughout the British Commonwealth. It was originally called “Armistice Day” to commemorate armistice agreement that ended the First World War on Monday, November 11, 1918, at 11 a.m.—on the eleventh hour of the eleventh day of the eleventh month.

Why did poppies grow In Flanders Fields?

The war created prime conditions for poppies to flourish in Flanders and north-west France (and Gallipoli). Continual bombardment disturbed the soil and brought the seeds to the surface. They were fertilized by nitrogen in the explosives and lime from the shattered rubble of the buildings.

In Flanders fields the poppies blow
Between the crosses, row on row,
That mark our place; and in the sky
The larks, still bravely singing, fly
Scarce heard amid the guns below.

We are the Dead. Short days ago
We lived, felt dawn, saw sunset glow,
Loved and were loved, and now we lie,
In Flanders fields.

Take up our quarrel with the foe:
To you from failing hands we throw
The torch; be yours to hold it high.
If ye break faith with us who die
We shall not sleep, though poppies grow
In Flanders fields.

More than one million served

More than 125,000 CAF and RCMP personnel served in 35+ countries including