Rally in opposition of Bill 23 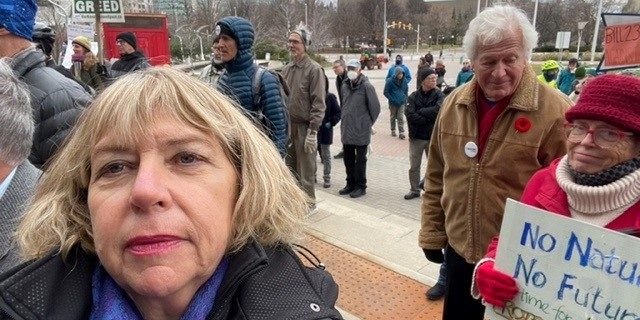 I joined my council colleagues, Jeff Leiper, Rawlson King and Shawn Menard, along with newly appointed Councillors; Ariel Troster, Sean Devine and Laine Johnson, at a rally held at City Hall on November 15th to voice our opposition to new provincial housing legislation. Should this bill move forward the More Homes plan would speed up the loss of existing affordable housing and take away the city’s opportunity to act aggressively to create more through inclusionary zoning and leave the city to deal with further homelessness and more poverty. As Don Herweyer, interim general manager of planning, real estate and economic development, points out, Bill 23 narrows the housing discussion to one of quantity and diminishes the critical role municipalities play in providing for quality and support for growth. The bill risks creating a significant imbalance with the rest of the city — where new housing is developed absent the services, amenities and infrastructure needed for long-term success.

Mayor to visit with Premiere on Tuesday November 22

In an email received yesterday, Mayor Sutcliffe informed councillors that he will be meeting with Premiere Doug Ford on Tuesday November 22 to discuss Bill 23, More Homes Built Faster Act, 2022, in addition to other issues such as ongoing pandemic-related pressures – including reduced transit ridership, the Social Services Relief Fund, and the need for recovery assistance resulting from the May 2022 derecho.  The Mayor will also meet with Minister Clark, the Minister of Municipal Affairs and Housing.  I will be sure to share details of the Mayor’s visit with residents once Council has received an update.