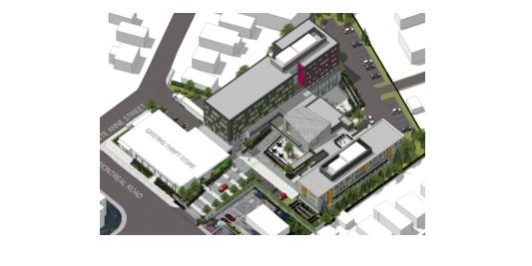 The City’s Planning Committee on June 3 endorsed the Salvation Army’s site plan for a residential care facility and emergency shelter on Montreal Road, east of Ste. Anne Avenue in Vanier. With complementary support services located on site, the facility aims to help some of Ottawa’s most vulnerable people.

The proposed design calls for an H-shaped facility with a four-storey wing to the west and a three-storey wing to the east, connected by a two-storey communal area. The design has been revised since an initial concept in 2017, and the west wing has been shortened from six to four storeys to ensure the building is compatible with existing homes nearby.

The current design also includes 32 supportive housing units, and the emergency shelter component will be 25 per cent smaller than originally conceived, offering 99 beds instead of 140. A proposed addictions program has also been eliminated from the plan.

While facing Montreal Road, the facility is set back considerably so as not to limit the road’s continuing development as a traditional mainstreet.