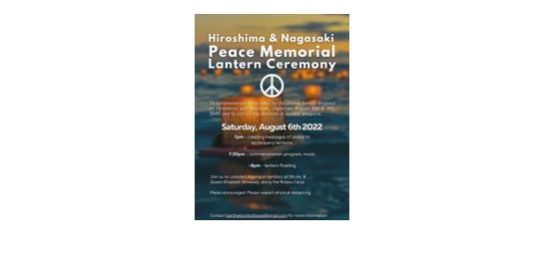 I am honoured to be speaking at the Peace Memorial and Lantern ceremony for the commemoration of the 1945 atomic bombings of Hiroshima and Nagasaki on Saturday August 6th starting at 7pm at Fifth Avenue and Queen Elizabeth Drive.

Calling for the abolition of nuclear weapons, the short program will include a representative from the Ottawa Japanese Community Association. There will be an opportunity for people to sign an enlarged signature page of the U.N. Treaty on the Prohibition of Nuclear Weapons (TPNW). The signatures will be presented to the Government of Canada to press it to take concrete action to ban nuclear weapons and support the Treaty.

This past spring I worked closely with  Ban the Bomb Ottawa and ICAN to craft a motion that passed on unanimous consent,  asking the City of Ottawa to support the Cities Appeal for the United TPNW.

As Ottawa City Council’s Liaison for Women and Gender Equity, I am keenly aware that all residents, including a disproportionate number of women and children in cities, suffer devastating and long-lasting impacts of nuclear weapons.