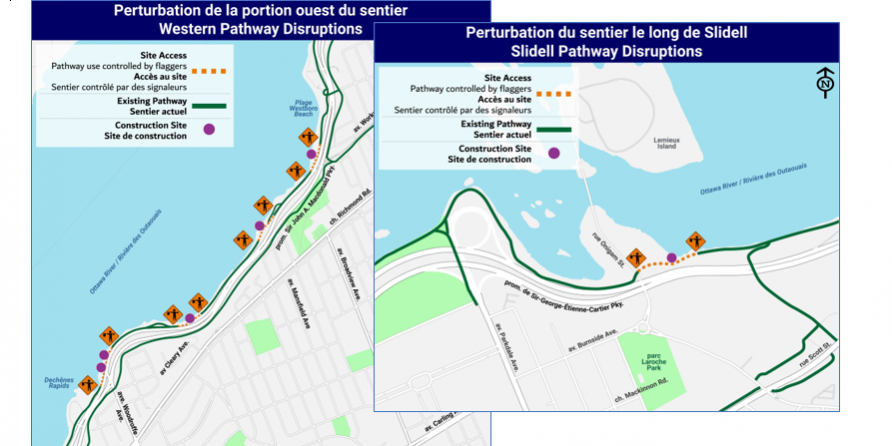 This project was initiated with the objective of rehabilitating several storm sewer outfalls where they discharge into the Ottawa River.  These outfalls, which were originally constructed in the 1930’s to 1960’s, provide important wet weather drainage for the adjacent neighbourhoods. They are now nearing end of life and require rehabilitation.  Four of the outfalls are located north of the Sir John A. Macdonald Parkway and the Western Pathway between Workman Avenue and Woodroffe Avenue.  One outfall, Slidell, is located north of the Sir George Etienne-Cartier Parkway just east of the entrance to Lemieux Island.

At the four outfalls along the Western Pathway, the overall scope of work will involve minor excavation works and rehabilitation of the outlet, including replacement of short lengths of existing sewer pipe and/or construction of new concrete or armour stone headwall structures.  At Slidell, work will be limited to cleaning of the interior of the existing sewer outfall pipe where it discharges to the Ottawa River.  Cofferdams and turbidity curtains will be constructed to separate the work zones from the river and measures will be put in place to mitigate impacts to the natural environment.

The exact timing of construction is unknown at this time, but to comply with federal fisheries windows, in-water work will be restricted to the period between July 15 and October 15.  The duration of the work is anticipated to be roughly 2 to 4 weeks at each site and the work is to be completed by October 30, 2020.

Additional background information and an interactive map showing the locations of the various outfalls is provided on the project website.