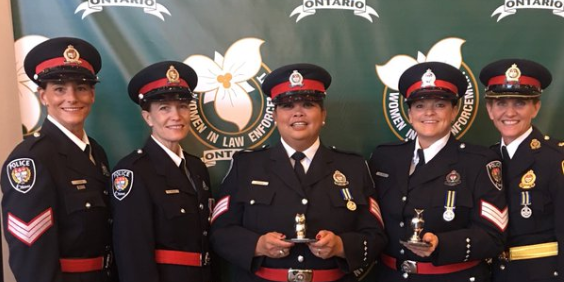 The Bytown Police was formed in 1855, but it would be 58 years before Flora Campbell became the first woman to take the oath to serve and protect.

Initially, she ran the telephone switchboard. Over her 21-year career, she largely dealt with charged women appearing in court, and if charges were dismissed, she helped them find employment.

When Flora resigned in 1935, she wasn’t replaced because her role was considered to be that of a social worker. However, with pressure from local women’s groups, Alice Goyette, a 37-year-old widow with two children, was hired. She earned $1,160 annually to her male counterpart’s $1,915.

In 1950, Edna Harry was the first woman to wear an OPS uniform. It consisted of a skirt, shirt, tunic, tie, shoes, hat, badge – and a purse.

In 1960, the Ottawa Police Women’s Auxiliary was formed. They enforced parking regulations, directed traffic and handled collision reports. They had authority to arrest but did not carry a firearm. Candidates had to be between 21 and 26 years of age, have completed at least two years of high school, be a minimum of 5 ft (152 cm) tall and at weigh at least 120 lbs (54 kg).

From a young age, Christie Cacchione wanted a career in policing.

“An officer came to my class. I was impressed with how she spoke to us and the presence she had in her uniform. She clearly cared about her community. I thought, that’s what I want to do.”

She made the high school honour roll and volunteered at the Ottawa Mission. She graduated with honours from the Police Foundations program at Algonquin College, and won the Police and Public Safety Institute Award. To earn experience in the field of policing, she took a position in the Ottawa Police Service Corporate Communications Section.

Now 19 years later, Constable Cacchione has worked on patrol, in Special Events, Traffic Escort and Collision investigations. As part of the 150th anniversary team, she helped create the police memorial plaques commemorating officers who lost their lives in the line of duty.

“It’s one of the things I’m most proud of. The plaques hang in our buildings for everyone to see the sacrifice these officers made for their community and ensures they won’t be forgotten,” she said.

Recently, Cst. Cacchione qualified to become a sergeant. Her career ambitions though, haven’t kept her from raising a family.

She’s a mother of two and is expecting her third child with her husband, an RCMP officer. She says making work-life balance a priority is how they succeed as a family and in their careers.

“We need to be organized to be there for our jobs and our kids. I work hard and I enjoy my job, but when I’m off, I turn it off. I make time for family and interests away from work. That’s how I get rested and recharged for the work we do, which is so intense.”

As a throwback to a past trailblazer, Alice Goyette would be proud to know her great-grandson is following in her footsteps. Cst. Mike Showler joined OPS in 2014.

Unlike during Alice’s time, today there are more women than ever choosing careers in policing.

Cst. Charlene Abella grew up in Hamilton, one of four girls. After graduating from Police Foundations at Mohawk College, she decided to learn the theoretical side of policing. She enrolled in Criminology at Carleton University with minor studies in psychology. While there, she played women’s basketball and as a senior player, led the team to the USports National Championships in 2018.

Cst. Abella is the first person in her family to choose policing as a career. “We are a tight-knit family and my mom and dad found it hard when I decided to stay in Ottawa. But, I fell in love with the city and the people here and I knew this is where I wanted to live and work.”

Like all rookies, her first assignment is patrol. “I’m so excited be part of policing and I work with a great platoon,” she said.

Eventually she would like to join Guns & Gangs, the Neighbourhood Resources Team or School Resources. For now, she’s happy on patrol, contributing to the wellbeing of her new community.

It looks like our city is in good hands.