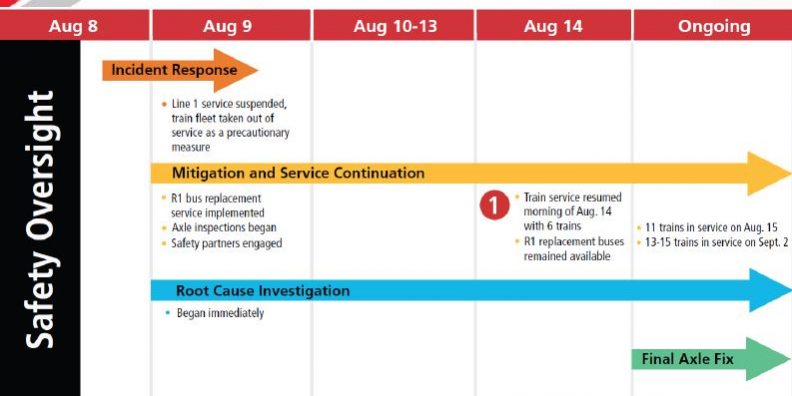 Staff also briefed the Transit Commission on an incident involving the derailment of a westbound Line 1 train between Tremblay and Hurdman Stations on the afternoon of Sunday, September 19, which has resulted in the temporary replacement of Line 1 service with R1 bus service to allow for investigation and repairs. (More details on this incident) In addition, staff provided regular updates on train service reliability, along with updates on wheel inspections and Rideau Transit Group’s (RTG) rectification plan.

The update also confirmed that ridership has been climbing steadily since Step 1 of the Province’s COVID-19 reopening on June 11, climbing to 29 percent as of Step 3 on July 16, and reaching 34 percent of normal levels in August.

On Monday, September 20th, the Transit Commission approved a motion calling for the City Manager to consult with the Regulatory Monitor and Compliance Officer to identify and retain an independent expert or experts to confirm the safety of the plan for return to service and report back to City Council and Transit Commission with a work plan and timelines for this independent safety review.

OC Transpo received a number of specific inquiries regarding the August 8 incident and ongoing axle assembly investigation, as well as other questions related to rail and bus operations. These questions and responses provided below were shared with the Mayor and members of Council on August 23, 2021.

In addition to regular track maintenance and daily inspections that occur on all railroads during hot weather, OC Transpo takes extra precautions during extreme temperatures to ensure the safety of our customers. RTM performs additional proactive track inspections when the temperature approaches 30 degrees and associated maintenance work is performed, as needed. During some periods of very hot weather, our control centre will proactively issue a speed restriction on sections of the track to ensure that all trains traveling through the area do so safely. These slower speeds have very little impact on customers’ travel times. While these steps have been proactively taken on several occasions this summer, they have not resulted in major service disruptions.

In late May, there were some delays to customers as RTM performed track related work due to hot weather. The planned maintenance undertaken in June improved track conditions and has meant service has continued to operate normally during the rest of the summer.

Regarding the August 8 incident, the investigation is ongoing. The root cause analysis will determine the cause of the axle bearing issue, however at this time, it does not appear to be weather related.

On August 7 Ottawa Fire Services and RTM were called as result of a report of smoke coming from one of the trains. Upon arrival, Ottawa Fire Services was able to remove a piece of cloth from the train (not a part of the train nor catenary) that was the cause of the smoke. There was no fire or damage as result. In accordance with our safety procedures, the train was removed from service, inspected and verified prior to returning to service.

On August 18, during the early morning launch process, one of the trains was proactively held back from service due to an error code identifying the possibility of a coupler issue. There are sensors that need to be correctly aligned in order for the two cars in a double train to communicate with each other. The sensors required an adjustment to remove the error code. Customers may have experienced up to an additional minute of wait time due to this train being held back.

Holding back the train in order to inspect and verify all systems are functioning properly is a standard operating practice, performed to ensure that all trains entering service are safe and ready to respond normally.

Coupler issues were previously reported to the Transit Commission, and, since the rectification work was completed this spring, this is no longer a frequent issue affecting service. These issues do sometimes happen on rail systems, and this is why we have processes in place to provide advance notice in order to assess potential issues prior to entering service.

Free transit is a policy decision of Council. The City Clerk can provide direction how to move forward with a proposal, if that is something Council wishes to pursue.

On Friday August 20, O-Train Line 1 experienced two separate and unrelated stopped trains that affected service. These sorts of service interruptions are things that occur in rail systems around the world, and OC Transpo has operating procedures and highly trained staff ready to respond should an incident occur to ensure safety and restore service as quickly as possible.

Further to details provided on Friday afternoon regarding a train that stopped near Hurdman Station causing a service delay for customers, RTM has confirmed that the stopped vehicle was caused by the loosening of a connector within the braking system. The train’s safety systems functioned as designed, and the train came to an immediate stop when the connector started to loosen. Some customers needed to be transferred from the affected train to another, and customers on the system may have experienced longer wait or travel times.

In a separate incident, at approximately 8:15pm a train travelling eastbound at Tremblay Station experienced a brief traction power issue and our control centre proactively decided to remove it from the line to ensure ongoing service. This was unrelated to the issue in the afternoon, or with the ongoing axle assembly issue affecting other trains. The train was delayed several minutes from exiting the track to return to the MSF. Unfortunately, this short delay was further compounded by an operational drill that was taking place at that time and contributed to the delays customers experienced.

Service continued to operate across the entire line during this incident, however, during this time, customers may have experienced longer travel times of approximately 10 to 15 minutes.

OC Transpo will be conducting a review of this event as well as our communications, which may not have accurately conveyed the service delay to customers.

As Transit Commission has previously been informed, RTM and OC Transpo continue to monitor and respond to concerns about odour at the downtown tunnel stations. To date, RTM has not yet been able to identify a specific pattern in terms of time of day, outside temperatures, or other factors that may relate to the presence of smells.

While investigating the odour at Rideau Station it was determined that groundwater was the cause. Minor water infiltration is common in tunnels and, when identified, injection grouting is used to seal the area. RTM continues to monitor this situation and perform injection grouting as needed. RTM is also monitoring air quality within the station. The results of this monitoring indicate that the air in the station is safe and well below any thresholds for concern. As grouting continues the odour experienced in the area is anticipated to subside. The investigation into the cause of the odour at Parliament Station is ongoing and the source has yet to be identified. However, as the grouting continues, it is anticipated that the odour experienced in the area should subside.

Investigation by an environmental engineering firm confirmed that the odours do not pose any hazard.

City staff present in stations will continue to report occurrences of odours to aid in the ongoing remediation efforts. Additionally, staff are working with RTM to explore other options to increase ventilation within the downtown tunnel stations.

On Friday, there were reports of a strong odour in Parliament Station and surrounding areas. Staff attended but could find no smell or cause.

No-charge fares for children 7 and under on OC Transpo and Para Transpo
January 28, 2022