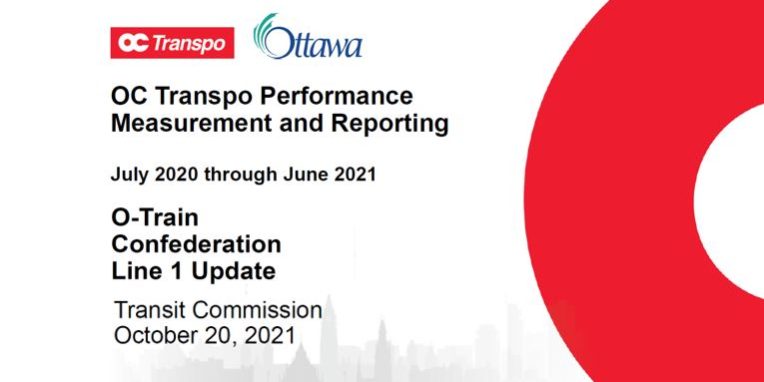 On Wednesday, October 20, 2021, the City’s Transit Commission received an update on plans to safely return O-Train Line 1 to service after a September 19 derailment resulted in suspension of Line 1 service. Staff confirmed that Rideau Transit Group (RTG) submitted a return-to-service plan to the City on October 15, targeting a partial return to service of seven trains beginning on November 1. RTG’s timelines for resumption of Line 1 service will be confirmed pending independent validation by Transportation Research Associates (TRA), a third-party safety expert retained by the City, in coordination with the City’s Regulatory Monitoring and Compliance Officer (RMCO).

Staff also outlined the response framework, communications approach, and preliminary findings from the September 19 derailment and provided a status update on the root cause investigations into both the August 8 and September 19 Line 1 derailments. The Commission was also updated on the ongoing monitoring of reliability and technical issues previously identified on Line 1 and was provided a status on the outstanding elements of RTG’s rectification plan. The update also included an overview of R1 replacement bus service operating during the Line 1 service disruption.

The Transit Commission carried a motion to extend the maximum transfer time for OC Transpo conventional bus service by 60 minutes, until such time that R1 bus replacement service is no longer required, with timing for this change to be confirmed by staff to Members of Council and Transit Commission. The motion will be considered at City Council on October 27.

OC Transpo also provided the Transit Commission with the second of its twice-annual performance reports for the period from July 2020 to June 2021. These performance metrics include customer safety, ridership, customer service, and service reliability.

The presentations to Transit Commission on October 20th, 2021, are provided below for Bay Ward residents’ information and review.

The following reports provide an update on the LRT Line 1 investigation so far.

Watch or listen to live meetings in progress, or access the video or audio of past meetings, directly on YouTube. For more information visit Ottawa.ca