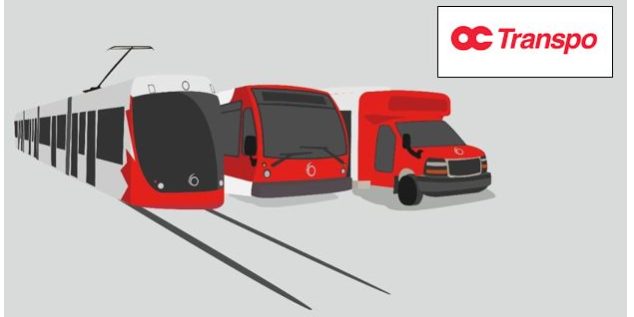 Despite COVID-19 challenges, Transit Services made substantial progress on 2021 Business Plan priorities. Some highlights of the completed work include:

The seven priority initiatives identified for 2022 are:

The Transit Commission also received an update on O-Train Line 1 and bus service. Data presented confirmed that reliability remains high since the resumption of Line 1 service in November 2021. Para Transpo continues to meet all customer trip requests, with an on-time performance of 98.5 per cent.

OC Transpo’s fare increase, originally planned for January 1, 2022, is scheduled to take effect on May 1. As directed by Council, this will proceed following confirmation from Rideau Transit Maintenance (RTM) that they will have 15 trains available for revenue service for a period of four weeks.

Staff reported that annual 2021 ridership was 32 per cent of 2019 levels on conventional buses and trains, and 42 percent of 2019 levels on Para Transpo. Month-by-month ridership levels in 2021 varied based on the vaccine rollout, changes in public health restrictions, reduction in bus service to match ridership and the unplanned closure of O-Train Line 1 in the fall.

The Transit Commission carried a motion that the Mayor write to the federal Minister of Finance, the President of the Treasury Board and the Minister of the Environment and Climate Change, as well as all Members of Parliament from the National Capital Region, requesting that the federal government provide funding to offset the operating deficit of OC Transpo, as a result of the decision of the federal government to maintain the work-from-home model past 2022, and that the federal commitment to provide public transit agencies with funding for operating budgets by 2026 be expedited. The motion will be considered at City Council on April 13.