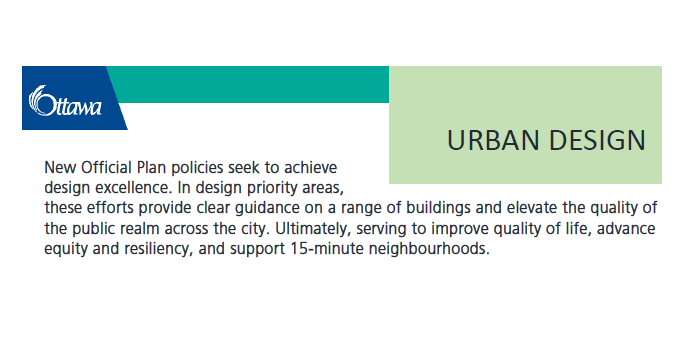 The City has developed 21 different one-page fact sheets to give people a general sense of the topics the OP will address. During the next couple of months, I will be highlighting these topics in the weekly Bay Ward Bulletin. Click here to view all the topics covered up to this issue.

The transect approach helps improve the urban design by laying out clear expectations for buildings; including height, density, and general characteristics. This also includes determining where urban style buildings are required and where suburban-style buildings may be permitted. Urban is exemplified by buildings that cover most of the lot and are oriented to tightly frame a street. Suburban is more dispersed to accommodate cars.

The transect approach provides a framework from which to understand:

For example, Downtown and Inner Urban Transects must accommodate higher volumes of pedestrian traffic than typical Corridors found in the Outer Urban and Suburban transects.

The four tiers of the Design Priority Areas (DPAs) outline design expectations for development. Expectations depend on location, design, delivery standards for the public realm and capital investment. The highest priority within the DPAs are the ByWard Market and Parliament & Confederation Boulevard Special Districts; areas associated with Ottawa’s international image as the capital of Canada. Second-tier DPAs are areas of national and regional importance, including the downtown core, Rideau Canal, Lansdowne and Ottawa River Islands Special Districts. The third tier consists of Corridors and Hubs within the Inner Urban transect, including village cores. Corridors and Hubs within the Outer Urban and Suburban transects are the fourth tiers, where current pedestrian rates are low but where transitioning to an urban form is anticipated.

The New Official Plan also supports partnerships resulting in the implementation of living streets where space is reallocated from serving cars to prioritizing people. Living Streets will improve quality of life by increasing safety, community interaction, greenery and will support creative cultural expression. Investments that respond to public realm deficiencies in neighbourhoods identified by the City’s Neighbourhood Equity Index will improve existing streetscape elements such as benches, light standards and landscaping, resulting in more walking safety and enjoyment in these areas.