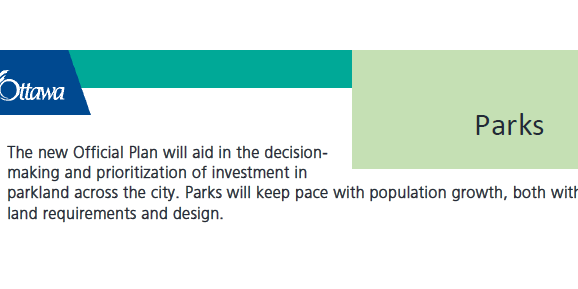 The City has developed 21 different one-page fact sheets to give people a general sense of the topics the OP will address. During the next couple of months, I will be highlighting these topics in the weekly Bay Ward Bulletin. Click here to view all the topics covered up to this issue.

The New Official Plan directs most new population growth to be accommodated through regeneration, requiring more parks for active recreation and cultural expression. Given the importance of parks to neighbourhoods, a new direction in the New Official Plan is to prioritize land dedication, instead of collecting cash-in-lieu of parks. Parkland and new amenities within existing parks will be identified in an Urban Parks Strategy, secondary plans and community improvement plans.

Parks will reflect their neighbourhood’s context.

To further integrate all elements of community planning, the New Official Plan will differentiate park policies by context, from the downtown to suburban and rural areas.

Parks are central pieces of infrastructure and equitable access to parkland is crucial to support urban life, particularly in high-growth, high-density areas. Urban plazas will include recreational uses and consider cultural development opportunities, in addition to seating.

The context is different in suburban areas and villages. The New Official Plan recognizes that there are more opportunities to provide the type of recreation, sports and community programming that can be found in larger parks.

The New Official Plan recommends the creation of a new park typology, the linear park. Studies have shown that linear parks with an active transportation component alongside playgrounds attract investment such as new housing to neighbourhoods. Through the COVID-induced need for physical distancing, the respite provided by simple things like a walk or run in the park has proved to be more important than ever.

Design parks that contribute to quality of life and respond to climate change and changes in society.

The New Official Plan recommends that the design of parks respond to climate change and our changing society. For example, as persistent heat waves increase in Ottawa over the next 25 years, allocating space for trees to provide shade and adding cooling amenities such as splash pads will be important. As density increases, shadow and wind on parks should be minimized. Parks in densely populated areas will need to be built to withstand high usage, and amenities may change to reflect culture and demographics, such as recreation needed for older adults.