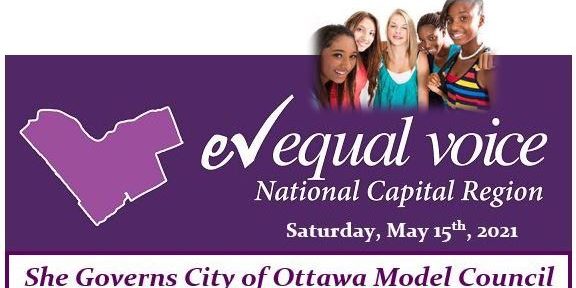 In my role as City Council Liaison on Women and Gender Equity it was my honour and privilege to host the first annual They Govern event virtually at City Council this past Saturday. The event was organized by the National Capital Region chapter of Equal Voice, a national non-profit, non-partisan organization that is dedicated to getting more women elected to all levels of government.  My office worked with other city councillor offices to encourage female/non-binary high school students to participate.  I want to thank my council colleagues for their interest and support in this project.  I would also like to thank the Mayor for his welcoming comments for this event.

The They Govern event  had 17 female or non-binary high school students who were City Councillors for the day and debated motions. The committee was staffed by our own City Council Deputy Clerk, Caitlin Salter-McDonald who kept track of the speeches and votes just as she does in our city council meetings. I wish to thank her for volunteering her time for this event.

The two motions in front of these Councillors for the Day were ones that had passed at city council.  One was the motion passed by City Council on a Climate Change Emergency.  The other was the motion passed by city council on an Affordable Housing and Homelessness.   I was blown away at the quality and strength of the speeches given by all participants at this virtual They Govern Council Meeting. I had the privilege of being the Chair/Mayor for this meeting along with my council colleagues Councillor Catherine McKenney and our newest and youngest councillor, Councillor Kitts.  We all took turns presiding over this meeting as the councillors for the day   We have seen the value of young women speaking out on issues that have concerned them such as Greta Thunberg or Malala Yusufzai and make real change.  Let’s build the next generation of female leaders now.