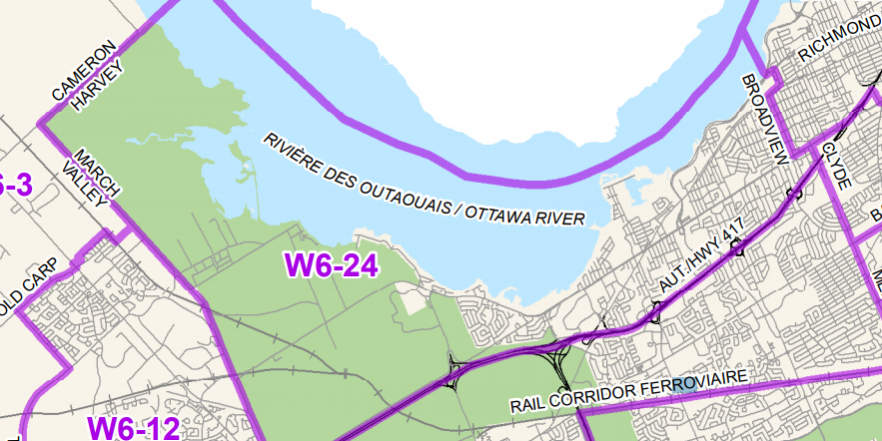 This past week City Council’s Finance and Economic Development Committee voted to accept a consultant-recommended ward boundary change and voted against a motion that I put forward along with my colleague Councillor Jeff Leiper to keep McKellar Park in Kitchissippi ward starting with the 2022 election.

The committee’s vote was unanimous, and it’s clear that Council’s vote on December 9th will go through.

This decision will mean that McKellar Park will become part of Bay Ward.   No other changes will take place with the current boundaries of Bay Ward.

The change is part of a broader review of Ottawa’s ward boundaries across the city that will add one more ward to city council for a total of 24 wards. There will be twelve urban wards, nine suburban wards and three rural wards in 2022.  This review is done to deal with the changes of population some of which have already happened and some of which are being forecast.

If no change is made to these boundaries, the population in Kitchissippi over the next four elections is expected to become unmanageable. Here are the consultant’s projections with no change to the boundary:

The McKellar Park addition will add 7000 residents to Bay Ward.  While I concur that there will be growth in Kitchissippi I believe the growth in Bay Ward has been very much underestimated.  I remain concerned about the extent and rate of development that has not been take into consideration in these calculations.  Although the consultants worked closely with City staff responsible for the new Official Plan they did not take into account future development not yet on the table in areas like Queensview Drive and Lincoln Fields plus underestimated current projects such as the Bayshore development.

Currently Bay Ward is a diverse and dynamic urban ward that is already seeing significant changes with intensification and infill as a result of the Stage 2 LRT coming through the ward for an anticipated opening in 2025.  It should be noted that the current population in Bay Ward is listed as higher than Kitchissippi which is not represented in the forecasted figures.

I get that to residents boundary reviews are not just about the numbers.  The residents of McKellar Park feel they are being removed from a ward they identify with but there are many factors to be looked at.

First and foremost, McKellar Park residents have raised the school issue. This is primarily in regards to concerns of the OCDSB boundaries more than the other three school boards.  Parents are worried that a change in municipal boundaries might affect school catchment area.  To address this the OCDSB released a statement confirming that school catchment boundaries are not affected by ward boundaries.  As a former OCDSB trustee for eight years who went through catchment area changes I can attest that catchment changes have more to do with the capacity of the school and not ward boundaries.  Major shifts of catchment areas are only taken on with the consultation of residents and are done only when there are major enrollment shifts throughout the district. The current catchment areas for schools, especially high schools, regularly cross ward boundaries such as Nepean High school where my oldest son attended despite our home being in Bay Ward.

In terms of other points raised by McKellar Park residents, both Bay and Kitchissippi have excellent shopping and services. I expect there will continue to be cross migration in both communities.

Where communities take an interest in a development on the other side of the line, their councillors get involved. Every councillor gets the same vote on applications.

As the current representative for Bay Ward, I can state that this ward identifies as urban and under the new Official Plan it is labelled as having both inner and outer urban zones.  I expect the Stage 2 LRT will give Bay Ward an even more urban feel by including more main street development along Richmond Road in the coming years. Neighbourhoods like Carlingwood and Woodpark have much in common with McKellar Park.

I can join my colleague Councillor Leiper in saying “that good urban design, sustainable transportation including great public transit and active transportation routes, the preservation of greenspace and achieving equity in our city are not just “urban” values. They are shared further and further afield from downtown Ottawa. Sherbourne is not a dividing line today and it won’t be in future between “urban” and “suburban”.  All wards are diverse and virtually none are comprised of a monolithic built form and perspectives on city-building. Every councillor in Ottawa faces the challenge of representing a rich spectrum of views, which is as it should be.”

After the 2022 election McKellar Park will join with Bay Ward and I hope they will grow to feel welcome.

Recommendations from the meeting will rise to Council on Wednesday, December 9.