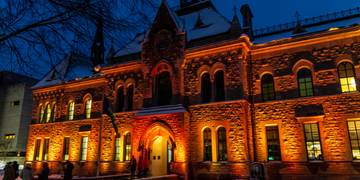 Beginning November 25th , the City of Ottawa’s Heritage Building will be illuminated in orange until Dec. 10 to mark the 16 Days of Activism against Gender-Based Violence. Help bring awareness and encourage people to call for the prevention and elimination of violence against women and girls.

I would like to share with you a copy of my statement made at City Council on Wednesday, November 25th, regarding the Integrity Commissioner’s Report on the inappropriate conduct of Rick Chiarelli. It is relevant that the integrity report was released on the first day marking the 16 Days of Activism against Gender-Based Violence. Let’s remember this day and do all we can to make sure it doesn’t happen again.

UNiTE TO END VIOLENCE AGAINST WOMEN AND GIRLS

WHEREAS, the City of Ottawa is committed to Women and Gender Equity and has established a Gender and Race Equity, Indigenous Relations, Diversity and Inclusion Branch; and

WHEREAS, the 16 Days of Activism to End Gender-Based Violence is a time to galvanize action to end gender-based violence which is pervasive around the world, including Canada; and

WHEREAS, the United Nations’ UNiTE Campaign raises awareness and calls for action during the 16-day period, using the colour orange as a sign of unity; and

WHEREAS, during the campaign people are encouraged to wear orange, government and city landmarks – including the Heritage Building at Ottawa City Hall – will be illuminated in orange, and municipal proclamations will be issued to demonstrate support;THEREFORE, we, Jim Watson, Mayor of the City of Ottawa, and Theresa Kavanagh, Council Liaison for Women and Gender Equity, do hereby proclaim November 25th to December 10th, 2020 Orange Campaign UNiTE to End Violence Against Women and Girls in Ottawa.