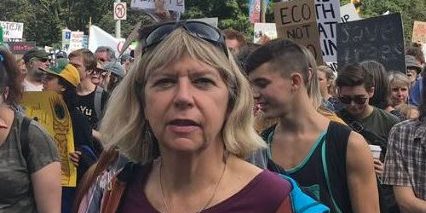 Why is there a global climate strike?

Today I attended the Ottawa Global Climate Strike that draws attention to the climate change crisis we are facing. It was inspiring to see the number of youth who are concerned for their future. Climate change is a problem that will not go away without buy in from every level of government, and an effort by us all as individuals.  We all need to do our part to make climate change a priority.  Each day the planet is getting warmer due to unrestrained human activity.  The strictest emission cuts being talked about would only give the world a 50 per cent chance of limiting future warming to another 0.4 degrees Celsius, which is a global goal.

Scientists say that, by 2050, there could be no sea ice in the Arctic in the summers, meaning devastation for northern communities and northern animals such as polar bears and walruses.

Mosquito-borne illnesses will climb as the planet warms, scientists say, with mosquitoes bringing illnesses rarely seen before in Canada into the north.

A NASA oceanographer says that within the next 80 years, the melting of Greenland’s ice could raise the sea level by more than one metre.

Extinction is looming over one million species of plants and animals, according to a UN report put out in May, due to factors such as pollution, overfishing and habitat degradation.

A climate report put out this week says that oceans are becoming more acidic and warmer, glaciers are shrinking, new illnesses are breaking out due to warming waters, and by 2060 it is estimated that coastal floods off British Columbia and the Maritimes that used to occur once a century will be annual events.

This is scary news and we all need to do our part.  As a municipality we need to encourage residents to use public transit, walk, and cycle as much as possible. This means putting investments in transit and pathways to encourage residents to minimize the use of cars.  We need to switch to electric cars and buses.  We need to reduce waste by encouraging residents to compost and to buy less single use plastics.  Let’s work together as a community to find ways to reduce our footprint on this planet.