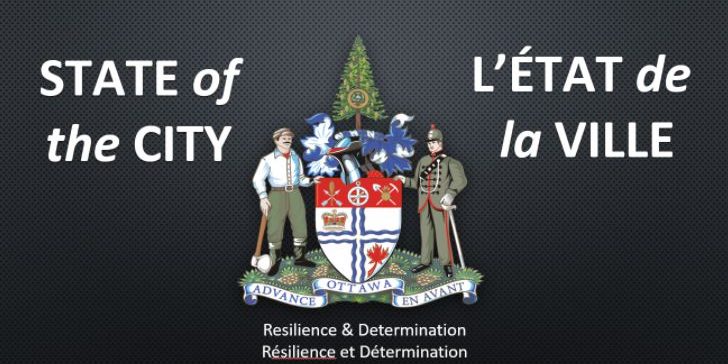 Ottawa – At the start of today’s Council meeting, Mayor Jim Watson delivered his State of the City address, looking back at Council’s accomplishments during his time as Mayor and outlining the City’s key initiatives and projects for 2022.

Work will continue in 2022 on major projects including Stage 2 LRT and Ādisōke, the Ottawa Public Library and Library and Archives Canada Joint Facility. The City’s first anti-racism strategy will be presented to Council in June, and residents can look froward to an old-fashioned exhibition at Lansdowne on July 2 to mark the restoration of the Aberdeen Pavilion in 1992. The City is also working with the Algonquins of Pikwakanagan First Nation to establish an urban addition to their reserve in Ottawa.

In recognition of his generosity and engagement with Ottawa, the Mayor brought forward a notice of motion to name a street after Canadian actor and philanthropist Ryan Reynolds. If adopted at the next Council meeting, Ryan Reynolds Way will be found in the new Cassette subdivision, which will be constructed at the corner of Mer Bleue Road and Brian Coburn Boulevard in the east end.

Due to the pandemic, last year’s Key to the City ceremonies were postponed. The Mayor hopes to recognize those recipients, including golfer Brooke Henderson, broadcaster James Duthie, former Governor General Michaëlle Jean and the Ottawa Citizen this year. The Mayor also announced he would present a Key to Dr. Vera Etches, the City’s Medical Officer of Health, for her leadership since the start of COVID-19, and another Key to the entire team at Ottawa Public Health for their outstanding efforts throughout the pandemic.

Ready & Resilient: Preparing for a sustainable future in public works
May 20, 2022

Here’s what happened at the Community & Protective Services Meeting May 19
May 20, 2022
Topics
Go to Top