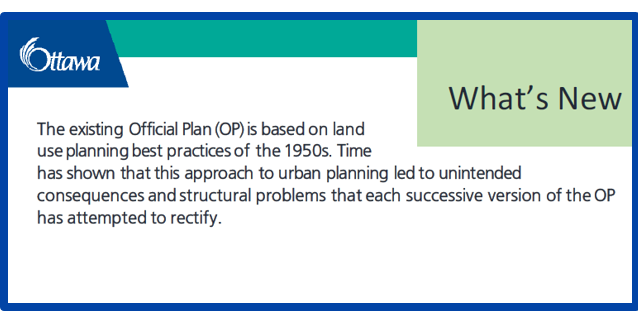 The City has developed 21 different one-page fact sheets to give people a general sense of the topics the OP will address. During the next couple of months, I will be highlighting these topics in the my weekly bulletin starting with the introduction below and 613 flats.

Some of topics that will be included are: 613 flats, climate change, food, housing, culture and heritage, parks, regeneration, urban canopy, mobility, high performance development standards, etc. Each area has a feedback form that people can fill out. The full draft New Official Plan is available at Ottawa.ca/NewOP.

For a high level introduction to what is new in the draft New Official Plan, please start with the introduction document shown below.

With a rigorous and early engagement process with Ottawa residents using an Equity and Inclusion lens to
inform outreach to traditionally under-represented groups – resulting in over 50,000 individual engagements –
the new Official Plan (OP) differs from the existing OP in three key ways to rectify past shortfalls:

The new OP will comprise the following six layers, which will be called Transect Areas: Downtown Core; Inner Urban; Outer Urban; Greenbelt; Suburban and Rural. This is different from the current OP, which only has two policy areas: urban and rural. The term “Transect” in the new OP represents the continuum between high density downtown core, through medium density urban and suburban contexts, to rural and natural areas. This approach is different from the coarser framework of the current OP and will guide the evolution of each Transect based on its more precise location and context.

Each Transect, Downtown Core; Inner Urban; Outer Urban; Greenbelt; Suburban and Rural, will have policies
that will apply to all designations within that Transect. Mobility and street design directions will also be included for each of the Transects and overlays (see point 3) will guide the intended change in each Transect.

The new OP will be focused on form and function. Form refers to the shape of buildings, open spaces and the public realm. Function refers to the role each type of space plays in the city. The policies in the new OP are centred around the proper design and placement of a building, as opposed to the old OP, which focused on how the building was used inside (land use). This new focus allows flexibility and evolution of structures over time.

In addition to designations, the new OP will introduce a brand-new concept at certain locations. Overlays are statutory policies that complement and build upon the “Designations” to highlight certain directions/features that are common across the city. In other words, Overlays provide additional local context to the designation.

These units support one of the New Official Plan’s primary goals of achieving more growth through regeneration than urban expansion. These units are meant to attract families and larger households to existing neighbourhoods, where in the past they would find their housing needs satisfied mainly in new suburban communities

613 Flats support the goal of creating 15-minute neighbourhoods by adding new housing that fits within the context of the neighbourhood. These new households will help support local businesses, schools and parks within a short walk from their home. Living in a walkable neighbourhood with these amenities helps promote better social, physical and mental health.

The 613 flats designs will require trees and soft landscaping to contribute to the existing character of the street and grow the City’s urban tree canopy.

These examples of 613 Flats are examples of how neighbourhoods could evolve. There could be many other types of new homes through regeneration. The New Official Plan sets the stage with high level policy to allow these new forms of homes while providing flexibility in design and shape across different Transect and neighbourhood needs.

New forms of homes will provide

This week at Planning Committee
October 28, 2022
Topics
Go to Top