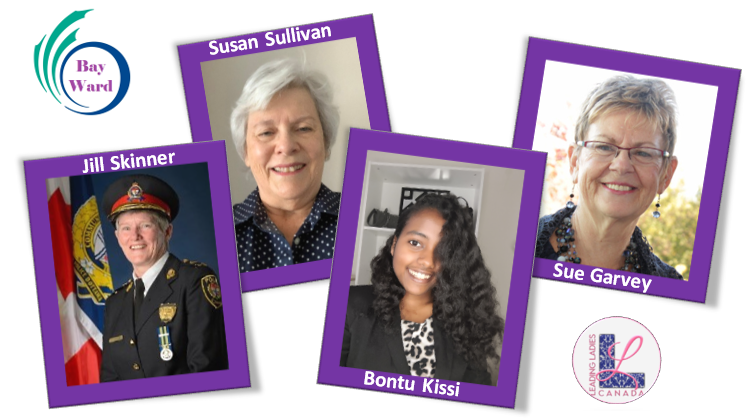 I will be co-hosting a virtual panel discussion with the Leading Ladies of Ottawa.

The panelists listed below are four Bay Ward women who will speak to their experiences and how they #ChoosetoChallenge.

Our panelists (scroll to the bottom for biographies):

To participate and receive the Zoom link, sign up below

If you did not immediately receive the link, check your spam folder.

Jill retired as Deputy Chief in 2018 from the Ottawa Police Service after 37 years of service. She spent a significant portion of her career working in investigations involving vulnerable victims of sexual assault, child and elder abuse. Jill was the driving force behind the creation of the Canadian Association of Chiefs of Police Victims of Crime Committee. She continues to be a Hearing Officer for Ontario police discipline tribunals. Jill has been a Board member with the Pinecrest Queensway Community Health Centre for 12 years & is a vocal advocate of community-based health services. Mrs. Skinner volunteers on the Ontario Court of Justice Indigenous Peoples Court (IPC) Strategic Development Committee. Jill is also a community volunteer with community partners on the Bay Ward Task Force on Gun Violence & Board member of Nepean Rideau Osgoode Community Resource Centre. She is operating the Ottawa office of Investigative Solutions Network (ISN) specializing in workplace investigations.

Mrs. Skinner completed her Master of Arts in leadership at Royal Roads University. She received the Governor General of Canada Member of the Order of Merit of the Police Forces (M.O.M.) and the Police Exemplary Service medal. She is married to Tony and is the proud mother of four children, grandmother of five and great-grandmother of one.

Bontu is a Grade 11 Woodroffe High School student. She is also a podcaster for the “It is well” podcast. It is a platform that she uses to share her experiences and show youth that there is hope even during this difficult time.

Her dream job is to work at 3abn Studio as a Production Manager and build her own podcasting Studio. She’s also a painter and enjoys cycling.

Susan grew up in Boston and put herself through college working as a medical technician on weekends, overnights and holidays. After graduation, she continued supporting her family while her husband attended medical school.

While at the Simone de Beauvoir Institute (Women’s Studies) she organized many events of which stand out. They were:

After retiring at age 71, she moved to Ottawa in late 2016.  In 2018, she found out that she needed heart surgery. Her experience with the surgery led her to a new chapter in her life as a peer leader in the Women@Heart Program which was developed by the Canadian Women’s Heart Health Centre.

Sue has lived her entire life in the Ottawa area. In 1974, she graduated from Immaculata High School. She attended Carleton University and earned a Bachelor of Arts in Sociology in 1977 and a Master of Social Work in 1988.

Ms. Garvey has worked for a variety of agencies in Ottawa, including the City of Ottawa, Boys and Girls Club of Ottawa, Pinecrest Queensway Community Services Centre and West End Community Ventures. She was the founding coordinator of Centre 507, a day program for those at risk of homelessness, and the founding Executive Director of Daybreak Non-Profit Housing. Ms. Garvey recently retired after 23 years with the Anglican Diocese of Ottawa as Executive Director of Cornerstone Housing for Women.