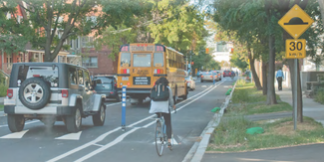 Councillors now have more measures they can draw on to calm neighbourhood traffic in their wards, according to an update received today by the City’s Transportation Committee.

For neighbourhoods that require more permanent measures, the Committee also approved a streamlined study process to speed up implementation of traffic calming plans and improve safety for all road users. The new process would prioritize streets where small changes would have big impacts, allowing the City to address traffic issues in more neighbourhoods.

Following the first phase of a two-phase review, the Committee approved amendments to the Road Activity By-law that would help mitigate the impact of road work on mobility and protect the City’s roads.

The amendments, which would come into effect on Monday, July 1, place responsibility on developers to resurface road cuts as part of construction. Changes include restricting road cuts into pavement less than three years old, expanding peak-hour restrictions on road work, increasing notification timelines and charging pavement degradation fees for all roads, with the revenue going towards road resurfacing projects.

Further recommendations related to the by-law, including fees and business processes, will be presented to the Committee next year.

Starting in April 2020, residents would be able to park their vehicles at Andrew Haydon Park in order to cycle to work, following the Committee’s approval of a three-year pilot project. The City would designate 10 spaces in the parking lot for cycling commuters, to be used between 6 am and 6 pm from April to November in 2020, 2021 and 2022.