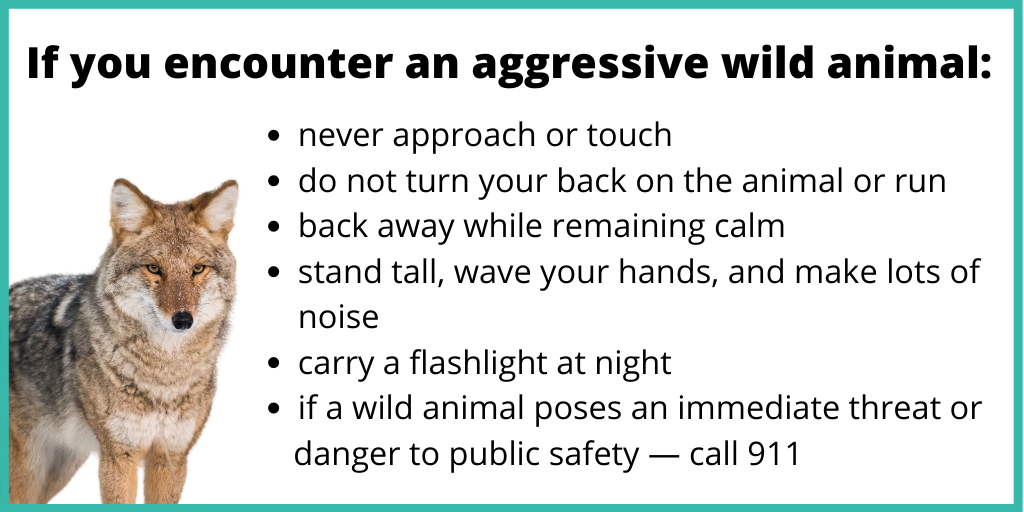 Who should I call when I see a coyote?

While coyotes are not typically aggressive,  City of Ottawa’s By-law and Regulatory Services Branch (BLRS) works with a wildlife specialist to monitor coyote activity. Residents are asked to remain vigilant and to avoid wooded areas, particularly after dark.

Coyotes are remarkably adaptable and resourceful animals. They help to maintain the natural balance in landscapes where traditional predators no longer exist. Urban coyotes in particular provide a valuable service to us by helping to control populations of animals that might otherwise become problematic, such as rats and Canada geese. With greater understanding and mutual respect, we can coexist with coyotes.

Conflicts between coyotes and humans often revolve around food. Never feed coyotes! This can cause coyotes to lose their natural fear of humans (a process known as “habituation”), increasing the chance of conflict.

Aggression by coyotes towards humans is extremely rare and almost always involves habituated animals. It is not normal behaviour.

Residents are asked to take the following precautions when encountering aggressive wild animals:

If a coyote approaches you:

Teach your children to react the same way, and to let you know immediately if they have seen a coyote (keep in mind that small children may not be able to tell the difference between a wild coyote and a neighbourhood dog).

Dealing with coyotes near your home

If you see coyotes near your home, make sure they have no reason to hang around:

Coyotes are naturally aggressive towards dogs, which they typically consider either as prey or as competitors. Dogs that are smaller than coyotes are usually seen as prey, and may be attacked at any time of year. Larger dogs are mostly at risk during the coyotes’ breeding season (January-April) due to increased territorialism in defence of mates and pups. Keep dogs on leash when walking them near parks or natural areas, and supervise them closely when letting them out at night.