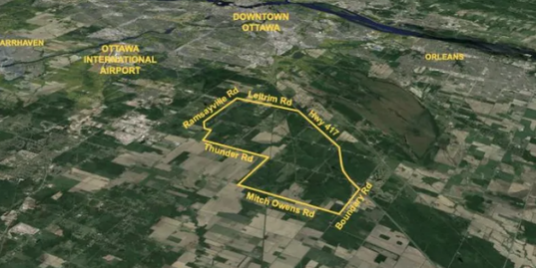 I’m disappointed that Council voted in favour of including the Tewin lands for future development of a new satellite community. Read my statement explaining my vote against it.

When Council adopts a new Official Plan before the end of the year, it will extend Ottawa’s urban boundary – the line that divides suburban and rural Ottawa – to include 1,281 hectares of land for new neighbourhoods. On Wednesday, February 10, Council approved where those lands would be located, along with policy direction to help protect sensitive lands from future urban expansion.

Those lands for new neighbourhoods include 445.35 hectares in a new satellite community called Tewin. The Tewin lands are located east of Leitrim and west of Carlsbad Springs, some of which are owned by the Algonquins of Ontario. Staff would work with the Algonquins of Ontario to identify specific lands and recommend them later this year when the Joint Planning Committee and Agriculture and Rural Affairs Committee consider the draft new Official Plan.

The City needs to add enough land for new neighbourhoods to comply with provincially mandated 15-year land supply requirements. Last May, Council approved selection criteria for determining which lands should be added to the urban boundary. At the same time, they approved higher intensification targets in existing communities that will lead to 60 per cent of new units being delivered through intensification between now and the end of 2046. Coupled with rules requiring minimum densities in new neighbourhoods, the new lands approved today by Council will mean Ottawa has reasonable alternatives for growth to the end of this century without requiring further urban expansion. That will help protect important agricultural lands outside the urban boundary.