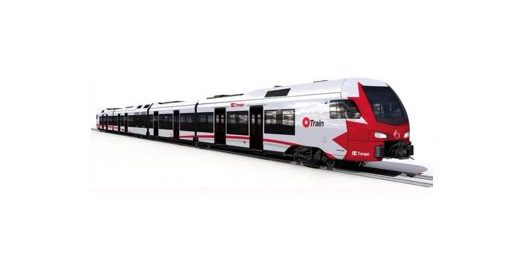 Today, the City of Ottawa unveiled the new fleet of Stadler FLIRT trains at the state-of-the-art Walkley Maintenance and Storage Facility. The train and the maintenance and storage facility are key features of the Stage 2 Light Rail Transit (LRT)’s O-Train South Extension.

Mayor Jim Watson and Councillor Allan Hubley, Chair of the City’s Transit Commission, were joined by Marie-France Lalonde, Parliamentary Secretary to the Minister of Immigration, Refugees and Citizenship and Member of Parliament for Orléans, on behalf of the Honourable Dominic LeBlanc, Minister of Intergovernmental Affairs, Infrastructure and Communities, to unveil and tour the new trains.

The Stadler FLIRT trains are 80 metres long, and at full capacity, will have the ability to carry up to 420 passengers along the main O-Train South line, from Bayview Station to Limebank Station. The City has purchased a total of seven trains as part of the Stage 2 LRT project to run on the extended O-Train South line. As the trains arrive in Ottawa, they are being tested extensively before being accepted and service begins.

The O-Train South Extension is one of the three major extensions to Ottawa’s light rail transit system. This extension will see the O-Train continue south from its previous terminus at Greenboro Station to Limebank Road in Riverside South, along with a link to the Ottawa Macdonald-Cartier International Airport.

The existing fleet of Alstom Cordia LINT trains, which previously provided service on O-Train Line 2, will operate on the Airport Link from South Keys Station to the Airport Station.

The FLIRT and the Alstom trains will be cleaned, inspected, maintained, stored and operated out of the new Walkley Maintenance and Storage Facility, a 4,700 square-metre LEED-certified building with train maintenance bays, a train wash facility, 1,800 metres of ballasted track, and 500 metres of interior track.

The Stage 2 South Extension will add an additional 16 kilometres of track to the existing O-Train South line, which runs from Bayview Station to Greenboro Station. Two new stations, Corso Italia and Walkley, will be added along the existing corridor. New tracks will be added to extend the LRT south to Limebank Road to serve Ottawa’s fast-growing southern communities, with new stations at South Keys, Leitrim, Bowesville and Limebank. The project also includes a link at South Keys Station to the airport, with two new stations at Uplands and the Airport.