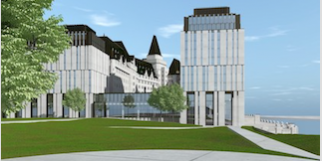 Ottawa, ON, August 13, 2020 —  HERITAGE OTTAWA is pleased to announce that it has reached an agreement with Capital Hotel Limited Partnership, an affiliate of Larco Investments Ltd. and the owner of the Château Laurier Hotel, concerning the proposed addition to the Château Laurier.

The agreement is based on a dramatically altered design of the addition that will see an end to the widely vilified horizontal bar-shaped structure that blocked the rear view of the historic hotel.

This ground-breaking change of course was made possible by the citizens of Ottawa and by Canadians from across the country who, responding to the absence of government action, joined Heritage Ottawa in its fight to find a better outcome for this beloved National Historic Site.

This breakthrough was enabled by the owner’s willingness to consider public concerns and to work with Heritage Ottawa and internationally respected Canadian conservation experts to revise the design in favour of a more compatible scheme that respects the heritage character of the Château Laurier. We appreciate Larco’s openness to negotiation and the good will it showed in those discussions leading to a resolution of this dispute.

The new two-pavilion design with low-rise connector is more compatible with the irregular silhouette of the original hotel and reopens iconic views to the rear courtyard that reveal the U-shaped form and picturesque qualities of the Château Laurier from Major’s Hill Park and re-establishes a more favourable relationship with the Rideau Canal.

The preponderance of Indiana limestone cladding and copper and bronze elements reflects the heritage character-defining elements of the historic hotel.

“From the beginning we have called for an appropriate contemporary architecture that respects the heritage characteristics of the hotel, and we are very pleased with this result,” said Richard Belliveau, president of Heritage Ottawa. “Heritage Ottawa could never have achieved this outcome without the advice of heritage experts and historians, and more importantly, without the financial and moral support of the Friends of the Château Laurier and the hundreds of Canadians who gave so much to this important cause.”

The Minutes of Settlement and associated design will require approval by the City of Ottawa and the Local Planning Appeals Tribunal (LPAT).