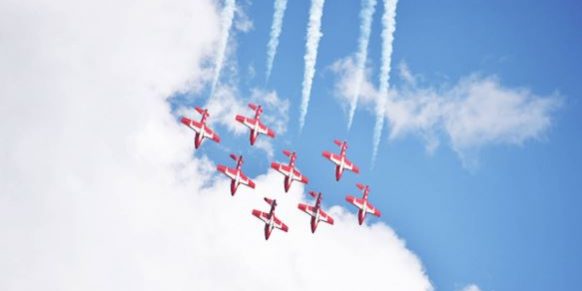 For the second year in a row, Canada Day programming as organized by Canadian Heritage, is taking place virtually.

The fly pasts will involve nine Snowbirds with 1 CF18 Hornet to join on Canada Day, with flight paths and times as follows:

➢ July 1, 2021 – Times from 11:50am and at 11:59 am
With a take-off from CYOW at approximately 11:50am conducting a fly over heading to Gatineau and time a split from North to South over Parliament Hill at 11:59 am. After the split will head out to Orleans, then towards Kanata with multiple orbits over the city. Will then head South to Greely / Manotick

Fly over locations with no particular order: