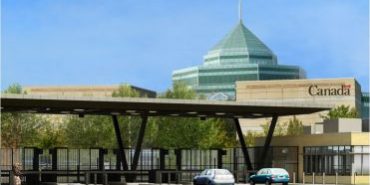 In the news this week we heard about the limited parking options at the Moodie campus of DND.  It was reported that the bus service is currently inadequate.

I checked OC Transpo senior staff and they stated that they have plans in place to improve the service to the new DND location as O-Train Line 1 opens, and then continuously make more expansions of service as DND moves more of its staff to the site. With the bus route network change that will be introduced following the opening of Line 1, three of the four current bus routes to the DND location will be combined into one frequent and direct service that customers from all over the city can connect to. The new Route 66 will run directly from Tunney’s Pasture Station to DND via the Transitway and Highway 417.

For example, customers from central and eastern areas can connect from Line 1 to Route 66 at Tunney’s Pasture Station, customers from Barrhaven and Riverside South can connect at Lincoln Fields Station, and customers from Kanata and Stittsville can connect at Moodie Station. OC Transpo keeps in touch continuously with DND to know the number of workers they have moved to their Moodie location and their schedule to move more. Route 66 will initially operate every 12 minutes in the morning and afternoon rush hours, which provides more than enough capacity for the current and expected near-term employment levels. OC Transpo will increase the number of trips and increase capacity on the route as employment levels increase over the months and years to come. As your Councillor and a member of the Transit Commission, I will continue to work on critical transit issues such as these.

No-charge fares for children 7 and under on OC Transpo and Para Transpo
January 28, 2022