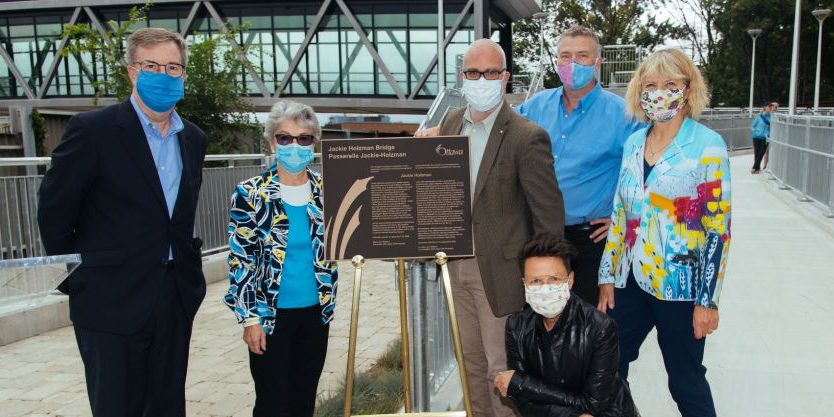 I was honoured to attend the opening of the Jackie Holzman Bridge on Thursday September 10th. This pedestrian and cycling bridge spans Highway 417 between Harmer Avenue South and Harmer Avenue North.

The renaming of the Harmer Bridge, to the Jackie Holzman Bridge, recognizes the extensive community service and exceptional impact Ms. Holzman who was the first Jewish woman and third woman to become Mayor of Ottawa (1991 to 1997). As a volunteer and Mayor, her goal was to remove barriers in the community so that everyone, including persons with disabilities, could achieve their maximum potential.

Construction to replace the former Harmer Avenue pedestrian bridge began in the summer of 2018. The new bridge forms part of the active transportation network, connecting the communities of Wellington West and the Ottawa Civic Hospital.

The bridge provides a new visual element on Highway 417 with improved accessibility and features, including an enclosed roof, glass panels and lighting. The total approved budget for the project is $13.5 million.

Jackie has been a long time resident of  Glabar Park in Bay Ward where her family continues to reside.

City of Ottawa is developing an Economic Development Strategy
January 26, 2023