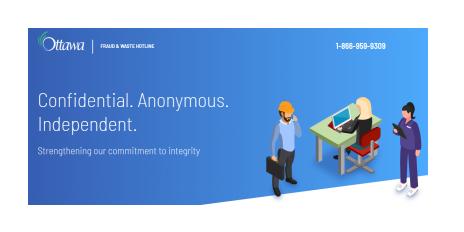 On Tuesday, May 25th, the City’s Audit Committee received the Auditor General’s report on the fraud and waste hotline.

The report showed similar numbers of residents and City staff contacted the hotline to report concerns in 2020 as compared to 2019.

Of the 189 reports that were closed last year, 27 cases constituted fraud or waste. Investigations resulted in three employees being terminated and three being suspended without pay.

These reports will rise to City Council on Wednesday, June 9.

If you wish to report an incident of suspected fraud, waste or other inappropriate activity, you can contact the Fraud and Waste Hotline at ottawa.fraudwaste-fraudeabus.ca or 1-866-959-9309.