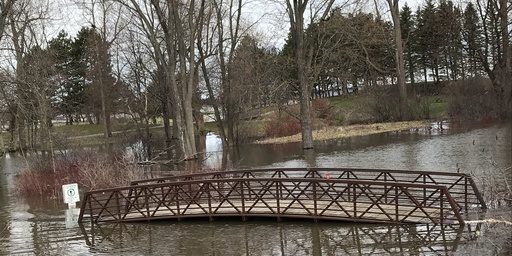 Conditions may change as we proceed through the normal spring freshet period, understanding that spring flooding is largely influenced by three main factors:

The Ottawa River Regulatory Planning Board is updated regularly.

As flooding is an annual event in Ottawa, the City will continue to make sand and sandbags available for residents at select locations across the community. The City has approximately 360,000 unfilled sandbags in inventory as well as over 21,000 tons of reclaimed sand ready to be deployed if required.
Sandbag stations are already in place. The current locations for sand and sandbag filling sites are as follows:

Residents who plan to collect sand and sandbags from these locations are asked to maintain physical distancing from others and to bring their own shovels, gloves and any other tools they may require.

The City’s Spring Flooding 2021 information webpage has been updated on Ottawa.ca and the City’s Spring Flooding 2021 Facebook page went live on March 12, 2021. The City will also issue feature stories to promote awareness of spring flooding and personal emergency preparedness. Other tools, such as a how-to video on making sandbags, pamphlets and signage are available to assist residents in their preparations.

For information on City flood preparedness, see the following website which will be refreshed in the coming weeks:

For information on water levels, see the following websites:

For information on flood plains, see the following websites:

For information on Ontario Power Generation, see the following websites:

Government of Canada and Province of Ontario information on flooding, see the following websites:

For more tips on preventing basement flooding, refer to the Handbook for Reducing Basement Flooding from the Institute for Catastrophic Loss Reduction.

The term freshet is commonly used to describe a large increase of water discharged in a river during spring months due to snow melt and sometimes rainfall. This can lead to seasonal flooding in low lying areas along rivers. The Ottawa River watershed, at approximately 146,000 km2 is an extremely large river system that experiences flooding to some degree every spring. The Ottawa River watershed conveys water from many rivers including the Rideau River. The Rideau River spring freshet typically peaks in advance of the Ottawa River.

Tips for getting your home spring-ready
April 8, 2022