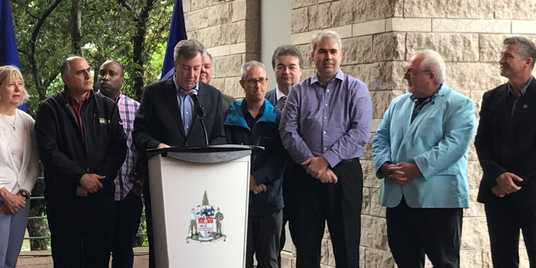 On Friday June 14th, Mayor Jim Watson celebrated a major milestone for the City of Ottawa. At an event with members of the community, Mayor Watson unveiled a new Welcome to Ottawa sign showing that our city has officially surpassed the one million population mark.

This milestone puts Ottawa in a different league of big North American cities. Ottawa is the fourth Canadian city to reach a population of one million, after Toronto, Montreal and Calgary. Ottawa, Gatineau and the surrounding municipalities include almost 1.5 million people, one of the six largest metropolitan areas in Canada.

In recent years, Ottawa’s population has grown by an average of about 28 people per day, including newborn babies, newcomers, students and other Canadians moving here. Overall, 70 per cent of our population growth has been from net migration – more people moving to Ottawa than moving away.

This growth is good for the strength of our local economy – one million is a critical mass in population that will allow Ottawa to generate more opportunities, both from a larger domestic market and increased investment from global stakeholders. Our growing population can also support more cultural activities, sports events and exciting projects that give us greater worldwide visibility, a more vibrant cultural and artistic presence, and a greater capacity to attract new residents and businesses.

Ottawa is now on its way to reach another significant milestone – we will reach our second million population mark much faster than our first. As our city keeps growing, we are planning what the future of Ottawa looks like. This year, the City began work on a new Official Plan, the strategic document that guides our growth and development.

The Official Plan impacts how and where the city will grow until the decades to come, affecting future generations. Our new Official Plan will ensure that we can keep pace and adapt to change in a way that makes Ottawa an inclusive, livable and globally competitive city.

“Reaching one million in population is an important milestone for Ottawa, and an opportunity to celebrate all the reasons we have to be proud of our beautiful city. While Ottawa’s status as a G7 capital signifies our role in international governance, our residents also take pride in our rich cultural mosaic, connection with nature and the many attributes that make Ottawa a quintessentially Canadian city. That we grew to one million people with so many new residents moving here shows what an outstanding place Ottawa is to live, work, play and visit.”